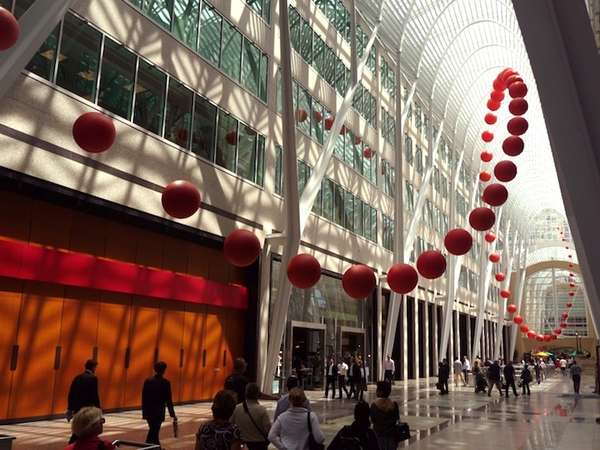 Meghan Young — August 23, 2012 — Art & Design
References: davidrokeby & mymodernmet
Share on Facebook Share on Twitter Share on LinkedIn Share on Pinterest
Long Wave by David Rokeby is a soaring art installation that revolves around large red spheres suspended from a ceiling. As its name suggests, it takes on a wave-like form that symbolizes the invisible radio wave that exists between the AM and FM radio frequencies. The Toronto-based artist writes, "In our contemporary wireless environment, populated by tiny centimeter long wifi transmissions, these radio waves are really the dinosaurs of our communications era. Appropriately, 'long wave' also resembles the suspended backbone of an oversized brontosaurus."

Located at the Allen Lambert Galleria in Brookfield Place, Toronto, Long Wave by David Rokeby is made up of 63 big scarlet balls. Commissioned by Luminato, this sculpture might be static, but it also conjures up an illusion of movement above people's heads that is entirely mesmerizing.
3.6
Score
Popularity
Activity
Freshness
Get Better and Faster