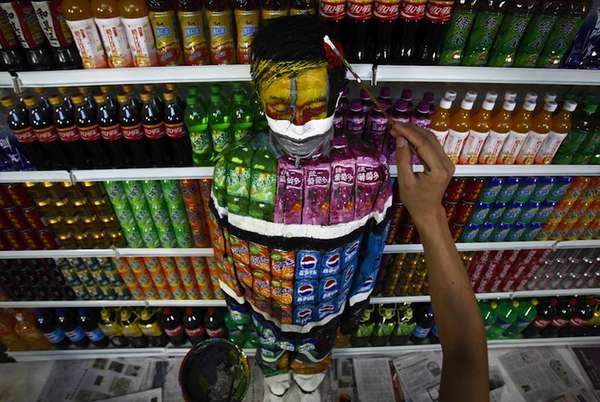 Liu Bolin's Plasticizer Project Blends Him into a Wall of Soda

Emily Evans — August 14, 2011 — Lifestyle
References: blogs.wsj & mymodernmet
Those of you looking at the Liu Bolin 'Plasticizer' project may recognize the work of this talented artist from some of his previous artistic stunts, which brought him to places like New York City. This latest work of art was enacted in Bolin's Beijing headquarters, where he had assistance in disappearing seamlessly into a row of soda.

The Liu Bolin 'Plasticizer' project is truly a sight to see; at first glance, it is easy to miss his figure amid the grocery store backdrop. This latest project is sure to help Liu Bolin attract even more of a fan following.

Implications - Artists like Liu Bolin maintain a reputation for their craft and yet are able to deviate their works of art slightly. Just as Bolin becomes synonymous for his disappearing style, companies too should maintain some degree of similarity within their projects while altering them slightly.
6
Score
Popularity
Activity
Freshness