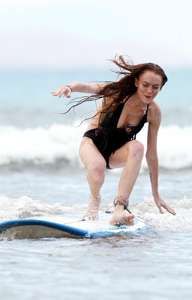 A “too skinny” Lindsay Lohan was picked on by the media in 2005 when she was seen club hopping, bones showing, with a then waif-like Nicole Richie.

After she gained weight, other tabloids called Lindsay Lohan fat. Now the 22-year-old actress is being dissed for looking emaciated once more.

But this time, LiLo says she doesn’t care what the media is saying.

“I like the way I look - I’m not starving myself, contrary to popular belief. I’m criticized when I’m too thin or too heavy,” she said.

The gallery shows some skinny pictures of Lindsay Lohan, some from a few years back, others of her current frame that’s sent the media into shock, such as those with her in torn white jeans on where she’s surfing in a bathing suit.

Lindsay Lohan's body getting so much media attention further proves the fascination with too-fat or too-thin celebs. The problem is: what is 'healthy' or 'normal' when the standards keep changing?

Check out on controversial body issues in the articles below.
5.6
Score
Popularity
Activity
Freshness
Get Better and Faster

Australia's Next Top Model Debate
Is Alice Burdeu Too Skinny to Compete?
play_circle_filled