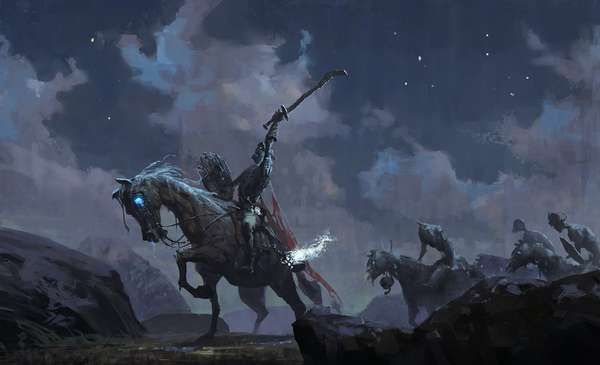 Jason Soy — December 30, 2011 — Art & Design
References: 0bo.deviantart & brok-lee.tumblr
Share on Facebook Share on Twitter Share on LinkedIn Share on Pinterest
Artist Lin Bo may hail from China, but he nails the classic European medieval look in these marvellous fantasy illustrations. And he doesn’t skimp on detail either when rendering dragons, knights and demons as viewers can clearly make out things like dragon scales and armor plating in Bo’s pictures. It takes quite an imaginative mind to conceive of these small, but important elements, and for Bo to consistently produce such well composed pieces speaks of his talent as a painter.

By examining the quick, but calculated brush strokes found in artist Lin Bo’s work, it’s evident that he works as a concept illustrator. It would not be surprising to discover that he works within the video game industry as he already regularly draws game-related fan art, as demonstrated by his portrait of Illidan Stormrage from Blizzard’s Warcraft franchise.
2.6
Score
Popularity
Activity
Freshness
Attend Future Festival