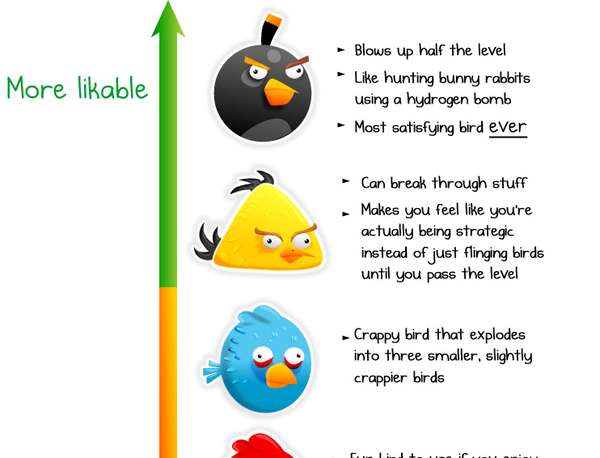 Evidently, the favored bird is the black orbicular character. The graphic reads, "Like hunting bunny rabbits with a hydrogen bomb." As the birds get more mediocre, or disliked the accompanying comments become more and more hilarious. The red bird is pretty useless, described as a "fun bird to use if you enjoy the feeling of throwing ping pong balls at a navy destroyer." However, the ultimate in unlikable is the green bird. The Oatmeal says, "If this were a bird in real life, I'd stir-fry it all the way back to the endangered species list."

The Oatmeal frequently creates Internet culture parodies, and indulges in self-mockery. The Likability of Angry Birds infographic is sure to induce laughter.
4.6
Score
Popularity
Activity
Freshness
Get Trend Hunter Dashboard