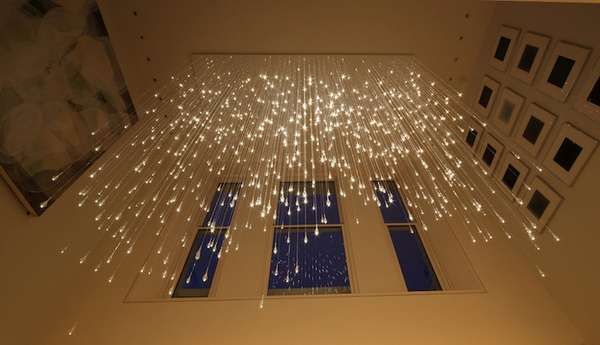 The Light Shower Chandelier by Bruce Munro is Romantic and Artistic

Meghan Young — August 22, 2012 — Art & Design
References: brucemunro & mymodernmet
Share on Facebook Share on Twitter Share on LinkedIn Share on Pinterest
The Light Shower Chandelier looks as though countless of raindrops have somehow been embedded with tiny LED lights. Dripping from the ceiling with a spectacular glow, they can also be likened to frozen fallen stars, captured for the pleasure of the homeowners. In reality, however, they are simply an artistic arrangement of lights, adding to the overall decor of a living space.

Created by United Kingdom-based artist Bruce Munro, who is known for his large-scale light installations such as Forest of Light, the Light Shower Chandelier simply brings his illuminating vision into the home. He was inspired one day at a lodge, revealing, "It was raining in squalls against the plate-glass window, which distorted the view with rivulets of water streaming down the panoramic pane. The words 'light' and 'shower' registered in my mind and I had my idea."
6.3
Score
Popularity
Activity
Freshness
View Innovation Webinars