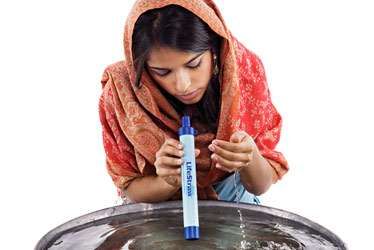 From the LifeStraw Website:
Sharing a passion to achieve the Millennium Development Goal of 'reducing by half the proportion of people without sustainable access to safe drinking water' by the year 2015, we recognize the immense sense of urgency.

At any given moment, about half of the world's poor are suffering from waterborne diseases, of which over 6,000 â€“ mainly children â€“ die each day by consuming unsafe drinking water.

Today, more than one billion people of the world's population are without access to safe water, causing lack of safe water supply to rob hundreds of women and girls of dignity, energy and time.

Recognizing the importance of safe water in our daily lives and the billions of people who are still without access to these basic human rights, LifeStraw® was developed as a practical response to the urgency, and confirm our commitment to achieving the MDGs.

Mobilising LifeStraw® offers relief from the waterborne diseases of major public concerns such as Typhoid, Cholera, Dysentery and Diarrhoea. As a personal mobile water purification tool, LifeStraw® is designed to turn surface water into drinking water, thus providing access to safe water wherever you are.
3.5
Score
Popularity
Activity
Freshness
Get Trend Hunter Dashboard