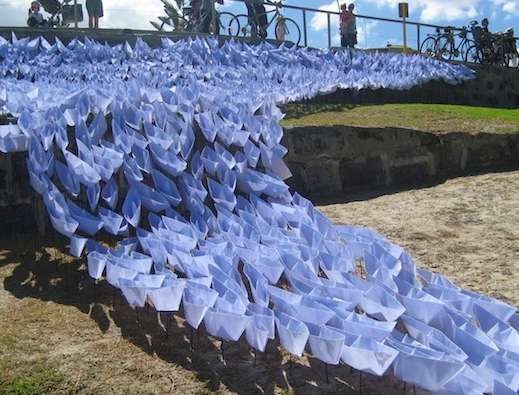 The Lifeboat Exhibit Was Made for Australia's Sculpture by the Sea

Jordy E — February 28, 2013 — Art & Design
References: sculpturebythesea & mymodernmet
Share on Facebook Share on Twitter Share on LinkedIn Share on Pinterest
Western Australia's Sculpture by the Sea event was privy to the cascading Lifeboat exhibit. The event turns a bed of sand into a sprawling display of art, drawing in over 70 artists who set up a diverse assortment of temporary installations.

Lifeboat was made of 1,697 origami-based boats. The small floating devices were laid out by graduates of the Central Institute of Technology, affording them with the instructional background that is required of this gigantic display of art. The piece was so successful that it took home Sculpture by the Sea's grand prize, a $15,000 scholarship. This award came not only of its sheer size, but also of its background as it pays tribute to Willem de Vlamingh, the Dutch captain who first discovered Western Australia's Cottesloe Beach.
5
Score
Popularity
Activity
Freshness
Get Better and Faster