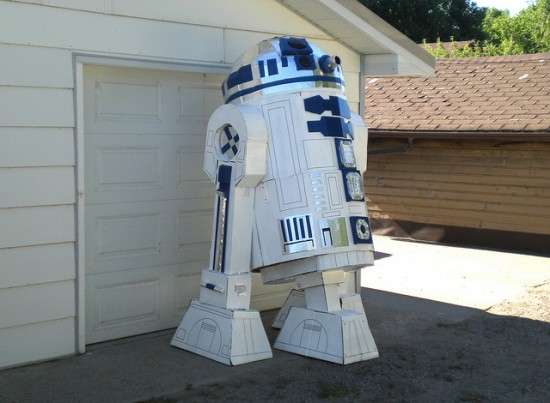 Deborah Kim — July 14, 2011 — Art & Design
References: flickr & odditycentral
Share on Facebook Share on Twitter Share on LinkedIn Share on Pinterest
This 8-Foot tall R2D2 comes from creative DIYer Len Komonac. When you really love something, what is the second best thing aside from having a million of that thing? I think the answer, or at least the answer for Len Komonac, may be having one, enormous version of that thing. Komonac, also known as 'DarthLen' on Flickr, is no stranger to Star Wars icons, figures and nerdy sculptures.

This giant wonder stands at roughly 8 feet tall, and is mainly crafted from cardboard and silver and blue duct tape. According to the designer, he used varying sizes of large appliance boxes, roughly 4 rolls of tape, 52 glue sticks, white paint and a couple of sharpie pens. He also claims that the R2D2 figure "has already crushed 4 Ewoks and mained a Jawa."
2.9
Score
Popularity
Activity
Freshness
View Innovation Webinars