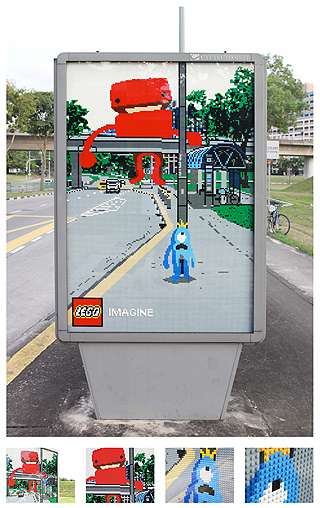 The LEGO Imagine Ad Campaign Blends in With its Surroundings

Meghan Young — July 29, 2011 — Pop Culture
References: blackbulbcreations.blogspot & psfk
When ad campaigns, like the LEGO Imagine, interact with their surroundings in some way, they becomes even more meaningful to the people they are talking to. Those who come across them walk away knowing that a lot of thought and effort was put behind these particular campaigns. The same goes for this featured featured LEGO Imagine advert.

Commissioned by Ogilvy, the LEGO Imagine ad campaign was designed by professional LEGO artist Nicholas Foo. Installed at specific bus stop sites around Singapore, they blend into their environment so realistically, passersby would probably have to look twice before realizing the LEGO Imagine campaign pieces are actually murals.