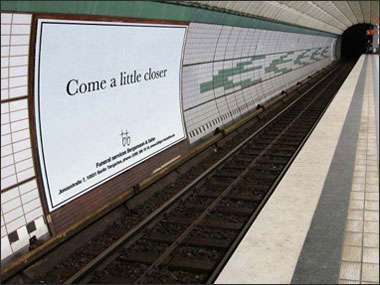 Half KM of Ads in London Heathrow Express

Bianca — December 3, 2007 — World
References: engadget
Share on Facebook Share on Twitter Share on LinkedIn Share on Pinterest
What better place to flash ads in consumer's faces than when they have no where to run? That seems to be the logical behind advertising in trains and subways, and the intention behind the half kilometre of LED ads planned for London Heathrow's airport Express.

Not only are advertisers making the most of the interiors of these commuter vehicles, but more advanced cities are beginning to utilize tunnel space for further brand infection.

"London is poised to light up a half-kilometer-long LED display in the tunnel between Heathrow and Paddington Station," according to Engadget. "Manufactured by Canadian firm SideTrack, the simulated video system -- which is composed of 360 individual LED bars synchronized to train speeds -- will replace a static version already installed along the same Heathrow Express route, thus allowing officials to change the message without swapping out physical signage."

Will London's airport install something similar to the ads in Asia?