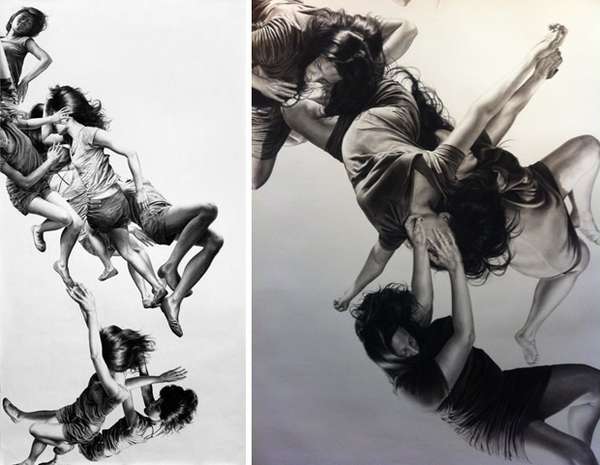 Sarah Moore — March 16, 2012 — Art & Design
References: leahyerpe & coolhunting
Share on Facebook Share on Twitter Share on LinkedIn Share on Pinterest
In all of the pieces that Leah Yerpe creates, it is difficult to tell where one subject ends and another begins. Featuring collages of male and female individuals overlapping each other in various contorted poses, the Brooklyn-based artist's work exudes a sense of both conflict and closeness reminiscent of the way that society can sometimes be so close, yet seem so far apart.

Each image shows people tossing and tumbling over top of each other in a beautifully chaotic state. To create these perplexing drawings, Yerpe first snaps pictures of the subjects dancing. She then arranges them into a photo collage, mixing and matching the images in varying arrangements and positions, and eventually, recreating the image by hand.

The drawings are quite striking, and leave those who view them wondering whether they are looking at loving embraces or violent clashes between human beings.
2.5
Score
Popularity
Activity
Freshness
Attend Future Festival

Digitalized Breakdancing Art
The Art of Aaron Campbell is Colorful