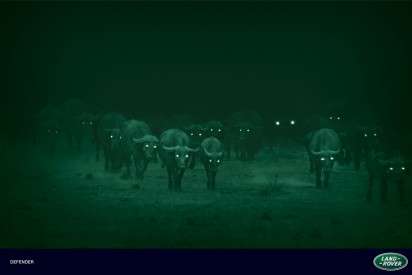 The Land Rover Defender Campaign Likens the Vehicle to an Animal

Meghan Young — May 30, 2012 — Autos
References: yr & ibelieveinadv
The Land Rover Defender campaign essentially describes this vehicle as a beast, which is what many people already view it as. Calling it as it is, the ad campaign nevertheless adds a predatory vibe to the allusion in order to give the off-road automobile much more edge and attitude than it already has.

Cleverly conceived and created by the Young & Rubicam ad agency based in South Africa, the Land Rover Defender campaign is captured through a night vision camera. Surrounded by wild animals, the Land Rover Defender becomes one itself, the headlights effectively turning into its very own night eyes that glow in the dark. It was art directed by Jac Sun with creative direction by Rui Alves.
3.5
Score
Popularity
Activity
Freshness