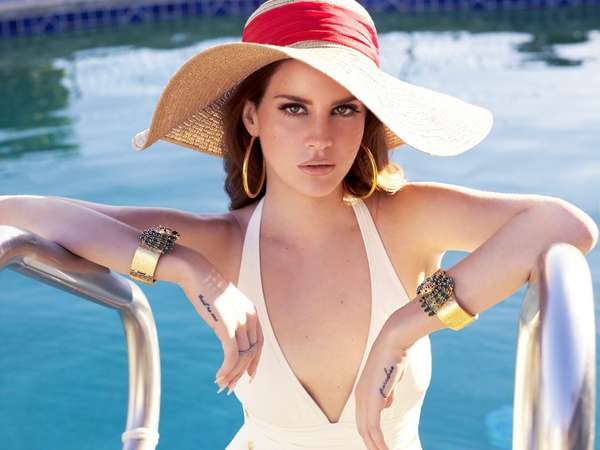 Katherinev123 — August 27, 2012 — Autos
References: hollywoodreporter & sassisamblog
Share on Facebook Share on Twitter Share on LinkedIn Share on Pinterest
Images for the upcoming Lana Del Ray Jaguar campaign have been released in promotion of the Jaguar F-Type sports car. By using the young songstress as an endorser, the car brand aims to capture the attention of young and hip drivers.

So far, however, none of the photos showcase Jaguar's F-Type, but one of the brand's spokespersons claims that images of Del Ray alongside the new car model will be revealed in the near future. As for these photos, the singer appears lounging around a pool wearing a sunhat and gold accoutrements as well as sitting back languidly on a lounge chair.

Del Ray, who has been criticized by consumers and the music press for her persona and "derivative attempt at channeling 1960s pop nostalgia," was chosen to be the face of the Jaguar F-Type because, according to Jaguar's global brand director Adrian Hallmark, the songstress and the car have a lot in common. He says, the new car model has a "unique blend of authenticity and modernity, which are two values we believe are shared with Lana in her professional achievements.”
4.2
Score
Popularity
Activity
Freshness
View Innovation Webinars