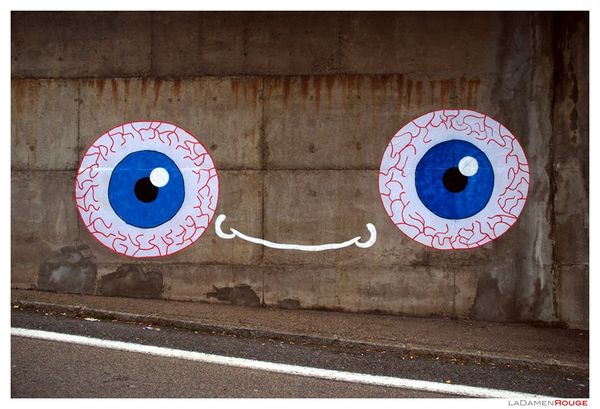 Ladamenrouge's Artwork Gives the Streets Its Own Pair of Eyes

Ladamenrouge, who is based in Saint Etienne, France, calls his work street art disturbance, and it's not hard to see why. His latest work, which is called Eye Wilds Shot, features a large pair of bulging, vein-infused eyes with wide blue pupils and a white squiggly line drawn underneath in between the eyes to imitate a childish smile on the side of the road.

Some of Ladamenrouge's previous work include invasive street art, where he has transformed various street installations in to provocative images using speech bubbles and stencils. One such work featured a leaning pole with a speech bubble caption, "I have an erection!" painted next to it.
1.9
Score
Popularity
Activity
Freshness
View Innovation Webinars