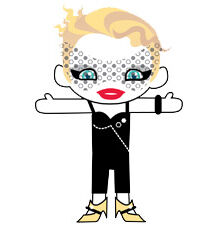 â€œKylie was a natural choice for the TOUS brand. Her strength and determination is what initially drew us to her,â€ says creative director Rosa Tous. â€œKylie compliments our fundamental values and we are very excited to embark on this relationship and nurture its growth over the next three years.â€

The partnership will extend through 2010 and will feature the Grammy Award winner in print, outdoor and online advertising campaigns.

The Aussie songbird will be photographed for the print and outdoor campaign in November, and the ads will be unveiled in June 2008.

â€œI was immediately attracted to TOUS,â€ says Kylie. â€œIt's is a fabulous brand, rich in heritage, and I am excited to be a part of it all. The more I learn about the company and their history, the more I appreciate the TOUS brand."

Kylie will even wear TOUS jewelry to the premiere of her film, White Diamond, tonight in London. She even flew to the company's headquarters in Manresa, Spain, earlier this week to select the pieces.
2.2
Score
Popularity
Activity
Freshness
Get Better and Faster