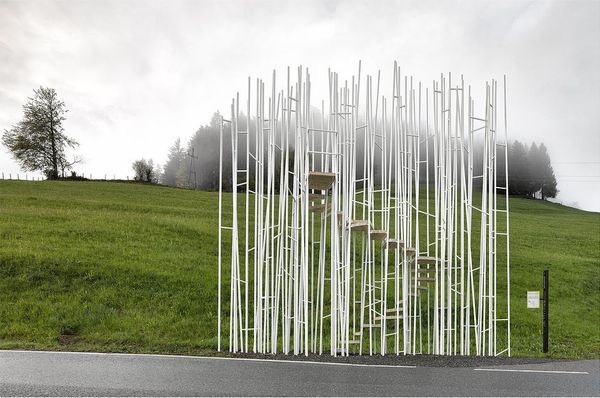 These Unique Bus Shelters Are Situated in Krumbach, Austria

Rahul Kalvapalle — May 20, 2014 — World
References: kulturkrumbach.at & citylab
Share on Facebook Share on Twitter Share on LinkedIn Share on Pinterest
Krumbach, a scenic Austrian village with a population of just 1,000, has the coolest bus stops you'll see anywhere in the world. The city has seven bus stops designed by seven different world-renowned architects and designers. The architects were approached by Krumbach's cultural organization and asked to design a bus stop, in exchange for which they would get a free vacation in Krumbach. It was an offer that none of the architects could refuse.

And so the seven international architects -- hailing from Japan, China, Norway, Spain, Chile, Belgium and Russia -- set about submitting their designs and constructing the structures with the help of local designers and craftsmen.

The bus stops run the gamut from rustic to futuristic. Japanese architect Sou Fujimoto's design looks like a clump of porcupine quills stuck into the sidewalk, while Norway's Rintala Eggertsson Architects' structure doubles as a spectator stand for the nearby tennis courts.

The initiative aimed to put Krumbach on the tourism map.