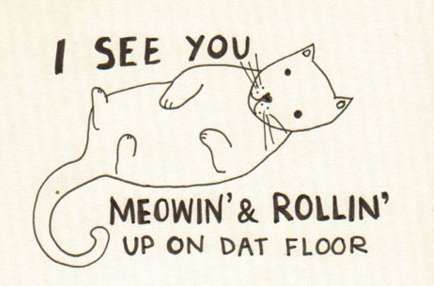 Marie C. Hudson — August 23, 2011 — Pop Culture
References: kittiesandbullshit.tumblr
Share on Facebook Share on Twitter Share on LinkedIn Share on Pinterest
Pop music favorites get the kitty cat treatment on the 'Kitties and Bullsh*t' Tumblr. Created by Sofia Falcon, the site showcases artwork that uses song lyrics and replaces key words with cat-themed lyrics. As Falcon explains on the blog, “I guess it’s like Al Yankovic, only all about cats.” The illustrations are simple but purrfectly hilarious. My favorite is the 'Single Ladies' makeover, which reads, "If you liked it then you should have put a cat on it," with a drawing of Beyonce wearing a kitten on her head.

With the amount of kitty-dedicated photoblogs, apps and Internet memes, it seems like it was only a matter of time before they stuck their paws in pop music. As a feline fan and pop music enthusiast, I adore the 'Kitties and Bullsh*t' Tumblr. Debuting in August 2011, the blog is updated several times a week with new kitty popstar tributes.
5.7
Score
Popularity
Activity
Freshness
View Innovation Webinars