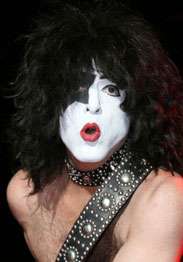 Geebee Micro — March 18, 2009 — Celebs
References: paulstanley & msnbc.msn
Share on Facebook Share on Twitter Share on LinkedIn Share on Pinterest
In the beginning of his public career, Paul Stanley’s face was a canvas, as he was a guitarist for the legendary band KISS. Now Stanley has taken a new interest in canvases, but it is no longer his face, but rather a place where he can express his creative side in a different way: with oils.

What makes Stanley’s transition even more remarkable is he actually failed art class at New York City’s High School of Music and Art.

Even so, some of the original works of Stanley have already commanded as high as $70,000.

Stanley says his goal wasn’t to create art for the purpose of selling it, but rather when he was approaching the age of 50, he began to look at other creative outlets he could get into.

Visitors to his home would always approach an original painting on the wall by Stanley, asking who the artist was. At that time Stanley knew he was onto something.

Critics say that even though Stanley has some of the fame thing going for him, in the art community that only gets you in the door. Many celebrities do art and aren’t successful in the way that Stanley is.
1.9
Score
Popularity
Activity
Freshness
Get the 2021 Trend Report FREE