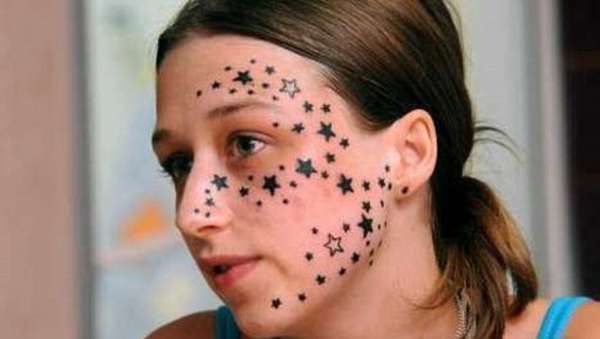 Kimberley Vlaminck says that she fell asleep during the tattoo procedure and woke up too late; Rouslan Toumaniantz maintains that Vlaminck asked for and accepted the unusual facial tattoo and remained awake throughout the process.

Although Rouslan Toumaniantz does not admit guilt, he has offered to pay for half the cost of laser removal for the 53 unwanted star tattoos on Kimberley Vlaminck's face. Here's more on this unusual story from the Daily Mail:

Toumaintz, who runs the tattoo parlour called The Tattoo Box in Courtrai, said Kimberley was awake and actually looked in the mirror several times during the procedure to see how it was going.

He said she knew 'exactly what she wanted'.

'The trouble all started when she went home and her father and boyfriend threw a fit.

'They are saying things now like I doped her or hypnotised her. What rubbish!

Alien Ink
These Extraterrestrial Tattoos Are Out of This World