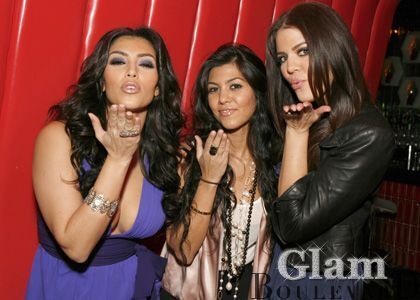 Kim and her sisters attended all the runways at last week's LA fashion week beside Kim catwalking for 2 B Free.

"We walked in the Christian Audigier show together. All three of us did it so it was so much fun. Last year I did it by myself. I was so nervous and I thought I was gonna faint when I walked out. My sisters were in the audience then but this time I got to see my sisters so nervous about how they were gonna walk."

The star, which also has a new reality show coming up (i.e. Keeping Up With the Kardashians), said, "It's definitely going to happen but we're just meeting with manufacturers at the minute so it's still in the early stages."

When asked about what kind of clothing they want to design she replied, "We want to start with jeans. Like a denim line. And then we want to do some really cute dresses and stuff that we would wear."

"Pretty much my whole wardrobe is from there.My life and my world is fashion."