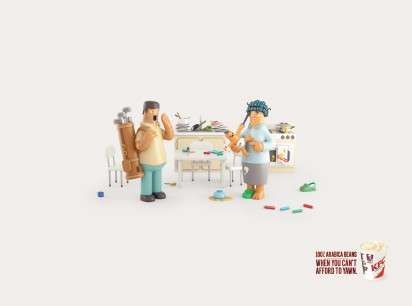 Meghan Young — January 29, 2013 — Marketing
References: ogilvy & ibelieveinadv
Share on Facebook Share on Twitter Share on LinkedIn Share on Pinterest
Yawning is rude at the best of times, but the KFC Coffee campaign shows that it can lead to something more serious than an exasperated scolding. Although a yawn is often hard to stifle, especially if deprived of sleep, there are certain situations when it can get people into some real trouble. For instance, yawning while one's grandson is playing the cello or when one has hit a Mr. T look-a-like's car, as depicted in two of the ads.