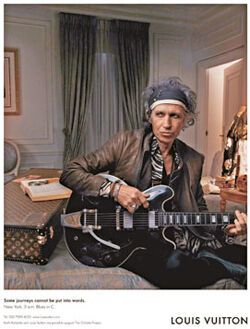 The ad, created by Ogilvy & Mather, was launched today. It features the Rolling Stone strumming on his guitar in a posh New York City hotel. By his side is a hard cased, rectangular suitcase with the iconic Louis Vuitton pattern and classic color scheme.

At the bottom of the photo is a tagline which reads, "Some journeys cannot be put into words."

This is the same slogan featured in the other ads in the series. One featured Mikhail Gorbachevin looking disturbed in the back of a cab in Germany, as he looked out the window at the Berlin Wall featured in the background. Next to him on the seat was an LV duffel bag. In another ad, French actress Catherine Deneuve is seen sprawled out at a train station, relaxing with her luxury LV luggage.

Tennis champions Andre Agassi and his wife Steffi Graf appeared in another ad where they were cozied up in a hotel, the luggage again a key part of the feature. Louis Vuitton has a video feature of the two on their website as part of the Journeys campaign which can be seen here.

Louis Vuitton offered several celebrities the opportunity to appear in their ads, but not all jumped at the chance including Nelson Mandela and Bill Clinton. Natalie Portman also declined because she is opposed to Louis Vuitton's use of animal products; the actress adamantly refuses to wear leather.
5.2
Score
Popularity
Activity
Freshness
View Innovation Webinars