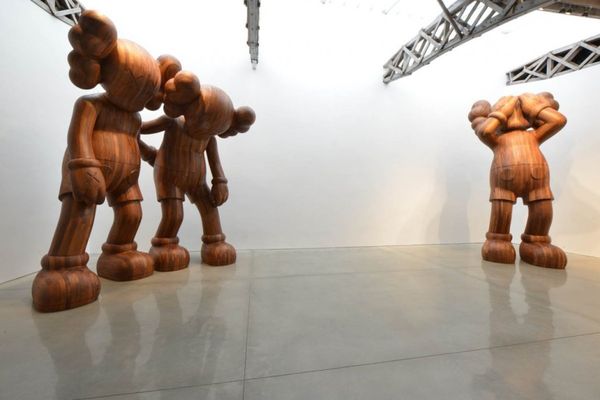 The KAWS Wooden Sculptures is the Latest Iteration of Campanion

Meghan Young — November 25, 2013 — Art & Design
References: kawsone & contemporist
Share on Facebook Share on Twitter Share on LinkedIn Share on Pinterest
The KAWS wooden sculptures once again revisits the Brooklyn-based artist's famous character, Companion. This time it has been interpreted in wood. Standing as large as the trees the material came from, these giant artworks stand disheartened as though some tragic event has just occurred. Interestingly, although the sculptures look as though they one, each of them were created separately.

The first two KAWS wooden sculptures are titled ALONG THE WAY and depict "a pair of the figures, heads lowered and one arm on each other’s back, embrace in a pose of gentle solace," as described on Contemporist. The second, dubbed AT THIS TIME, is much more heart-wrenching as the character stands with head craning back and hands covering face.
2
Score
Popularity
Activity
Freshness
Jeremy Gutsche Keynote Speaker