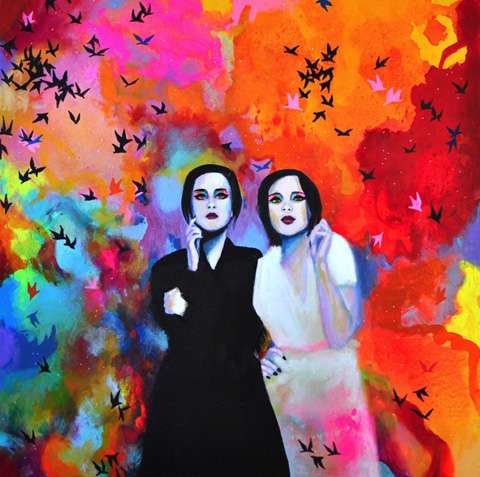 One look through Joshua Pekter's portfolio makes it clear that despite his interest in figuration and abstract art, his work is still strongly influenced by his graff roots. Some highlights include an elegantly dressed woman with a paintbrush in hand creating an impressive diffusion of colors, or two (almost) identically dressed girls playing in a field of eye-catchingly bright spray paint.

Joshua Pekter's artwork has been exhibited around the world, including Los Angeles, San Francisco, and the United Kingdom. The Evergreen State College (Olympia, Washington) graduate currently resides in Los Angeles.

Implications - It was just a few years ago that street art and graffiti were one of the most unheralded subcultures in the art world. The last few years have seen a marked change in the way they are viewed, graffiti and street art is considered to be one of the most important art movements of the 21st century. Any company seeking to capitalize on the acceptance of this still developing genre would be wise to partner with a respected street artist to create some marketing. The ads would give the company immediate artistic credibility and help brand them as one unafraid of taking risks or being truly avant-garde.
5.1
Score
Popularity
Activity
Freshness
View Innovation Webinars