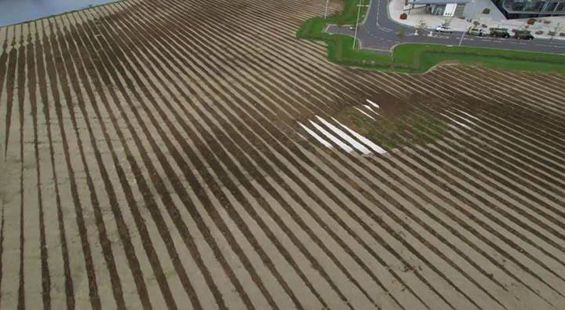 Rahul Kalvapalle — May 1, 2014 — Art & Design
References: jorgerodriguezgerada & beautifuldecay
Share on Facebook Share on Twitter Share on LinkedIn Share on Pinterest
For Cuban-American artist Jorge Rodriguez-Gerada, size matters. He is well known for forging humongous large-scale charcoal portraits of people on buildings in their neighborhood and creating massive sand murals. He has now taken the scale of his artwork to the next level by creating pieces that can be seen through Google Earth.

His most recent work, titled ‘WISH’, is a portrait of an unknown girl in Belfast, Northern Ireland, where the piece is located. The portrait, which spans an area of 11 acres, took several years to complete. Topcon GPS technology was used to map the area, before a pattern of plotted grids was devised. 30,000 wooden stakes were then applied as markers used to guide the creation of the portrait, which was somehow put together by volunteers using a mind-boggling 8 million pounds of rock, soil and sand. Unsurprisingly, WISH took several years to complete.

“Working at very large scales becomes a personal challenge but it also allows me to bring attention to important social issues,” Jorge Rodriguez-Gerada said. “The size of the piece is intrinsic to the value of its message.”