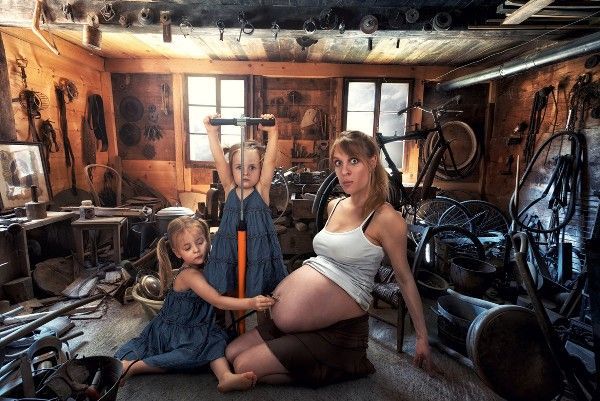 Megan Facciuolo — May 6, 2014 — Lifestyle
References: johnwilhelm.ch & designtaxi
Share on Facebook Share on Twitter Share on LinkedIn Share on Pinterest
John Wilhelm is known for his amazingly manipulated photos of animals, but this most recent John Wilhelm photography series shows a more familial side to the artist. The Switzerland-based IT director and photographer created imaginative photo manipulations of his girlfriend Judith and their three daughters Lou, Mila and Yuna.

The wondrous photos feature the trio in fairytale-like scenarios, such as playing with an octopus in the bathroom, conducting a train, wearing oil-covered overalls and howling with the big bad wolf. It's clear Wilhelm has an endless imagination, but he does still tend to infuse animals into his works.

He says he really loves "bringing different images together to create something completely new,” and gets a lot of his inspiration from TV shows and movies.
6
Score
Popularity
Activity
Freshness
Get the 2021 Trend Report FREE