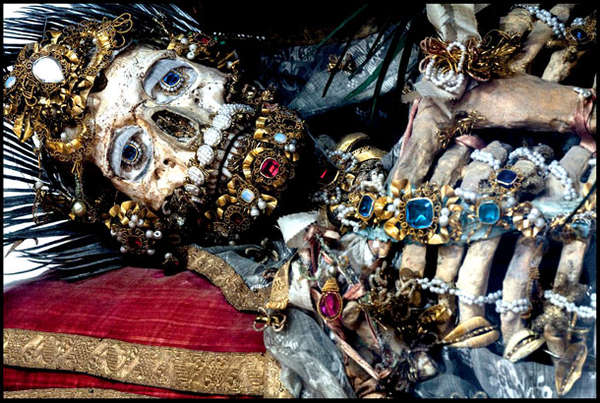 These Incredible Jeweled Skeletons are Historic Pieces from Rome

The book, ‘Heavenly Bodies: Cult Treasures and Spectacular Saints from the Catacombs’, tells of the fascinating discovery in 1578 of a series of tombs under Roman streets where decayed skeletons—assumed to be the remains of early Christian martyrs—were found. The skeletons, which were originally named ‘The Catacomb Saints,’ were shipped to Europe and were clothed and adorned in precious jewels, crowns, armor, clothing and wigs. After being dressed, they were displayed in various churches to replace relics destroyed in the Reformation and to remind faithful-for-life Catholics of the riches and wealth that awaited them after death.

Some of these skeletons took five years to decorate! That’s a lot of time spent around the dead. From the photographs, you can tell the skeletons are intricate, beautiful and took a great deal of work.
6.1
Score
Popularity
Activity
Freshness
Attend Future Festival Virtual