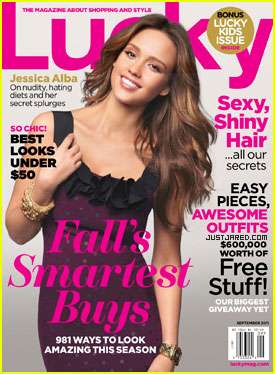 Souzan Michael — August 9, 2011 — Pop Culture
References: jessicaalba.net & justjared.buzznet
Share on Facebook Share on Twitter Share on LinkedIn Share on Pinterest
As a mother of a toddler and with one more on the way, the Jessica Alba Lucky Magazine September 2011 photo spread and interview make the actress seem like a true superhero. Decked out in a polka dot, ruffled Marc Jacobs dress and her signature flowing locks, Alba has a lot in common with her Spy Kids 4 character, as she talks about her multi-tasking, hectic lifestyle and strong will.

Alba shares with the magazine, "There’s a video of me when I’m three, saying ‘This is a woman’s world, and I don’t need a man for nothin’!'" The Jessica Alba Lucky Magazine September 2011 issue makes it clear that Alba's 3-year-old Honor will be raised to be an independent, hard-working woman just like her stunning mom.
1.8
Score
Popularity
Activity
Freshness
View Innovation Webinars