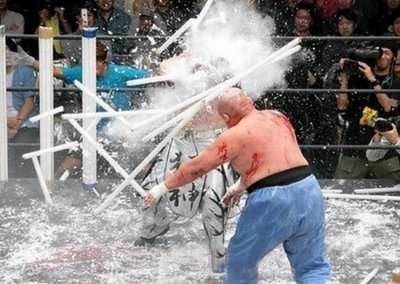 Cowbag — October 5, 2008 — Lifestyle
References: ca.sports.yahoo
Share on Facebook Share on Twitter Share on LinkedIn Share on Pinterest
As if wrestling in the first place was not enough to worry about, these Japanese wrestlers have added fluorescent lights to the mix. Throwing these light bulbs at each other does make a change from the traditional deviations like foam, custard or water, but this has the potential to do some harm.

The pro wrestling scene in Japan does have a few gimmick matches like these. Their purpose is to drawn attention to the Japanese pro wrestling scene. Other hardcore weapons used include barbed wire, folding chairs, trash cans, weed whackers, cacti, cheese graters and television sets.

I would love to see a cactus match!
4.6
Score
Popularity
Activity
Freshness
Get Better and Faster