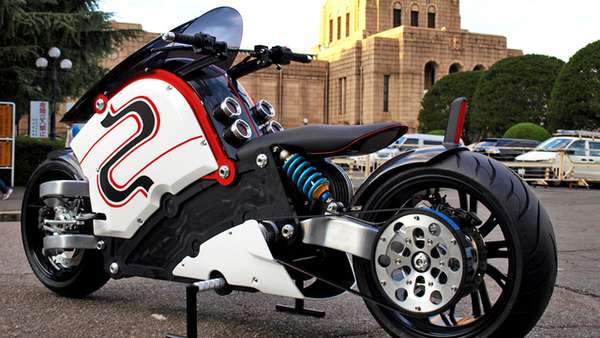 Sarah Robson — May 3, 2012 — Autos
References: zecoomotor & bikeexif
Share on Facebook Share on Twitter Share on LinkedIn Share on Pinterest
The Japanese ZecOO Electric Motorcycle was recently revealed at the 2012 Tokyo Motorcycle show, which is known for unveiling custom motorcycles. This bike is similar to a standard motorcycle except it runs on electrical power, with full charging time ranging from four to six hours.

The electric bike also has a futuristic, low-rider style ironically combined with classic retro aspects. This bike, designed by Znug Design, will be available in limited supply and cost around $70,000. The Japanese press have launched this product across its nation because it takes a custom approach to the world of electric technology. The aesthetic and adventurous elements can be seen in the front suspension system. With many interested buyers, it appears that there is a bright future ahead for the ZecOO.
6.9
Score
Popularity
Activity
Freshness
Get Better and Faster