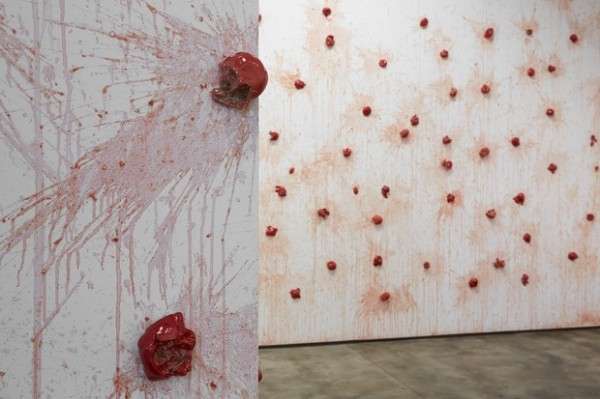 Irreversible by Los Carpinteros is Gritty and Unexpected

Meghan Young — June 4, 2013 — Art & Design
References: loscarpinteros.net & trendland
Share on Facebook Share on Twitter Share on LinkedIn Share on Pinterest
The art exhibit titled Irreversible by Los Carpinteros, a Cuban collective made up of Marco Castillo and Dagoberto Rodríguez, is full of politically-charged installations. In line with the duo's past work, there is nevertheless a grittier quality about their latest creations. The exhibit is chock full of mixed medias including sculpture and video to better divulge the artists' take on revolution.

Currently on show at the Sean Kelly Gallery in Chelsea, New York City, Irreversible by Los Carpinteros may be an intersection between art and society, but its reflections are done in unexpected and even humorous ways. For instance, one wall is completely covered in splattered tomatoes while another sculpture has been made entirely out of everyone's favorite building blocks, LEGO. The gallery writes, "Their carefully crafted works use humor to exploit a visual syntax that sets up contradictions among object and function  as well as practicality and uselessness."
0.4
Score
Popularity
Activity
Freshness
View Innovation Webinars