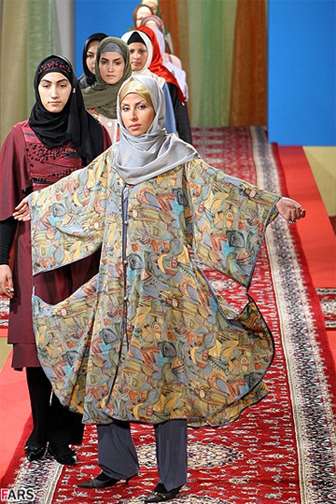 Until now, fashion has been incredibly taboo in Iran's Islamic culture. Some internet providers even prohibit the word 'fashion' as a Google search term. This extreme ban on stylish garb led to the hosting of underground fashion shows in Iran, popular among rebellious youth.

As the image shows, Iran is pushing for a similar aesthetic to other international runway shows. The first image shows a fashion show which still stays strong to Iranian culture, taking place on a catwalk draped in a crimson Persian rug with delicate details iconic of traditional Iranian decor.

Times may change the Iranian fashion world, however. The Fashion and Costume Design Festival will take place later this month in Tehran, so stay tuned for updates! The show will include men's and women's fashion as well as styles for children.

"Sets of ornaments and jewelry will also go on display at the festival. It is a trend that unfortunately has been neglected in Iran for years," according to the Tehran Times.

I'm looking forward to seeing more from the Iranian art and design world, and hope that it becomes internationally recognized as Iran is in dire need of positive media exposure.