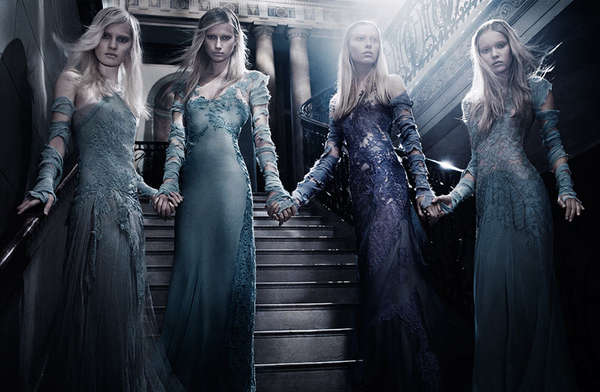 The Interview Russia February 2013 Photoshoot is Dark and Magical

Meghan Young — January 30, 2013 — Fashion
References: interviewrussia.ru & fashiongonerogue
Share on Facebook Share on Twitter Share on LinkedIn Share on Pinterest
The Interview Russia February 2013 editorial may have been inspired by the movie, 'The Virgin Suicides,' but there is also a supernatural appeal that will bring 'The Craft' and, more recently, 'Beautiful Creatures' to people's minds. From the cold and dark sisterly scene in the empty manor to the warmer candlelit room that the models end up lounging in, it is hard to shake the witch-like theme.

Shot by photographer Christian Ferretti, the Interview Russia February 2013 editorial showcases the spring 2013 collection from Alberta Ferretti. Starring models Steffi and Daria from NY Models, Lauren from DNA and Ella from Ford, the photoshoot accentuates the ethereal qualities of the gowns they are clad in. Styled by fashion editor Gro Curtis, the editorial was shot on location at a New York mansion.
3.4
Score
Popularity
Activity
Freshness
Get Better and Faster