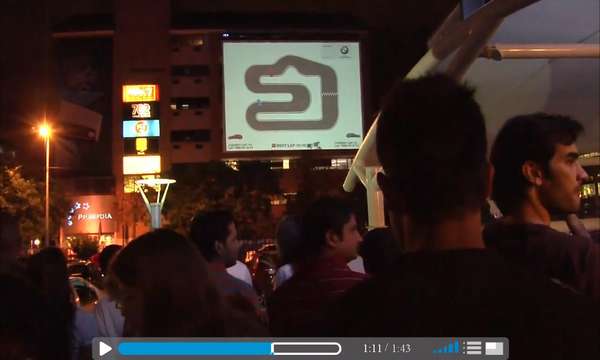 Josh Mears — January 23, 2012 — Autos
References: facebook & creativity-online
Share on Facebook Share on Twitter Share on LinkedIn Share on Pinterest
Car enthusiasts start your engines, BMW South Africa has released its ‘1 Series’ Interactive Video Projection and has utilized social media and interactive racing promotion to make sure it gets off with a bang. The event took place across various locations in South Africa, which were all virtually connected to each other, and the Internet.

The goal of BMW South Africa’s interactive racing promotion was to engage potential car buyer and land create a captive audience to spread the news about the new line of cars its releasing. The promotion used projected video screens onto scaffolding and large buildings, which showcased a simple but effective racing game in which each of the competitors choose one of the newly released cars and drive around the track.

The participants in the outdoor interactive racing promotion were given an Android tablet to use as a controller, while crowds started forming. The event was an overwhelming success as the buzz created from this event had many people in communities and on the web excited for BMW South Africa’s launch of its 1 Series line.
2.1
Score
Popularity
Activity
Freshness
View Innovation Webinars