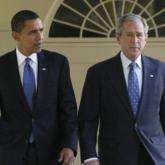 Reports are swirling on the internet of tickets, 250,000 of which are distributed to members of Congress and Senators for free. The inauguration tickets have not been released yet, but the tickets are expected to be snapped up at auction for as much as $40,000 for the swearing in ceremony.

This has aroused ire with some groups, who are already drafting legislation to make it a federal crime to scalp tickets.

With over 1.5 million people anticipated to attend the ceremonies, the area's 95,000 hotel rooms are already reportedly sold out. Special four-night packages are being offered with special gifts, such as jewelry from Tiffany’s.

“The Fairmont Hotel is offering an 'eco-inaugural' package, which includes four nights in a suite filled with organic materials, a ball gown from an organic designer and the use of a hybrid car. It costs $40,000.”

With all the economic doom and gloom, at least Washington will get a lift for its economy, and hopefully a sign of better things to come for the country.
1.3
Score
Popularity
Activity
Freshness
Access Advisory Services