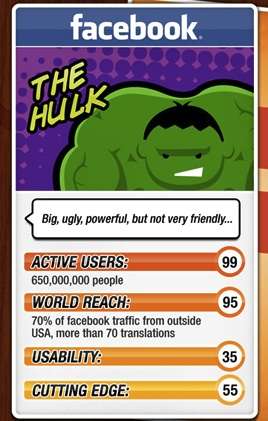 The 'If Social Sites Were Superheroes' Infographic is on Point

Corinne Guirgis — August 7, 2011 — Pop Culture
References: blog.freestyleinteractive & adverblog
Share on Facebook Share on Twitter Share on LinkedIn Share on Pinterest
The Internet social revolution has seen the rise (and fall) of many competing and coexisting websites, from Facebook to Flickr, and the 'If Social Sites Were Superheroes' infographic uses humor to put each of these websites' roles in perspective. This clever infographic gives each social site a superhero counterpart whose strengths and weaknesses are comparable to each respective comic book character. These hilarious infographic is painstakingly accurate and features all of the big names of the Web-savvy world.

Most accurate of all is Facebook's comparison to the Incredible Hulk on account of its substantial size and dominance, complete with the description, "Big, Ugly, Powerful, but not very Friendly." Google+, on the other hand, has been cast as Silver Surfer: "Mysterious, promising but a complete unknown," with Twitter as Spiderman: "Fast, agile, capable of forming large webs of connections."

Implications - The vast array of social media websites available to consumers is often overwhelming, and the role and significance of each varies along several characteristics that determine the type of consumer who would actively use each site.
6.5
Score
Popularity
Activity
Freshness
Access Advisory Services