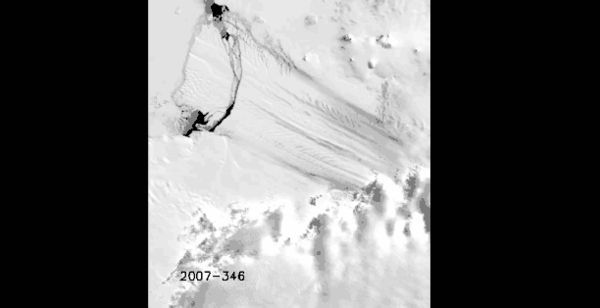 Rahul Kalvapalle — May 14, 2014 — Tech
References: jpl.nasa.gov & gizmodo
Share on Facebook Share on Twitter Share on LinkedIn Share on Pinterest
NASA recently revealed the concerning and disturbing news that the West Antarctic Ice Sheet had begun an unstoppable collapse that is going to cause a rise in sea levels over the coming centuries and millennia. Now, NASA have released a short time-lapse that shows the beginnings of this unstoppable and catastrophic event in a small section of western Antarctica. It covers a period of 12 years, from 2002 to 2014.

The timelapse shows the Amundsen Sea region, a small section of the ice sheet and an area described as the 'weak underbelly' of the West Antarctic ice sheet.

Even though it represents a small area of the West Antarctica Ice Sheet, its melting represents and important and ominous event because if it melts completely, it will raise global sea levels by over four feet. If the entire ice sheet melts, it will raise sea levels by 16 feet, spelling catastrophe for coastal cities.
2.8
Score
Popularity
Activity
Freshness
Get Trend Hunter Dashboard