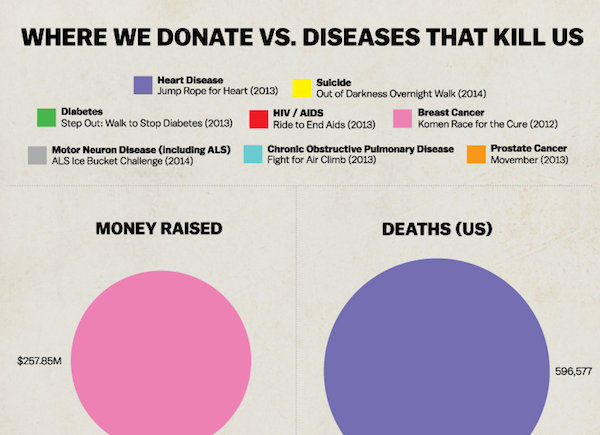 Alyson Wyers — September 2, 2014 — Pop Culture
References: vox & designtaxi
As the ALS Ice Bucket Challenge donations reached the $100 million mark, Vox health reporter Julia Belluz contemplated which charities people give to compared to what illnesses are actually killing the most amount of Americans. In an infographic called Where We Donate vs. Diseases That Kill Us, Belluz asserted virality "shouldn't dictate our charitable giving."

The infographic was based on CDC data from 2011 that analyzes popular fundraisers in contrast to the number of fatalities caused by the disease. While the author made a point of saying motor-neuron disease (which includes ALS) is an "awful, debilitating disease," she also noted people do not have the best track record when it comes to fundraising based on impact. She referenced celebrity culture and how that influenced the amount of Ice Bucket Challenge donations.
6.4
Score
Popularity
Activity
Freshness