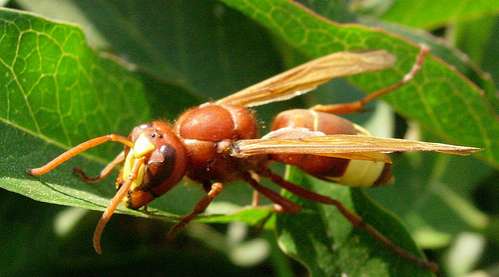 The Body of the Oriental Hornet Can Harvest Solar Energy

Katie Cordrey — May 16, 2011 — Eco
References: springerlink & sciencedaily
Share on Facebook Share on Twitter Share on LinkedIn Share on Pinterest
A Tel Aviv University research team has shown that the Oriental hornet can harvest solar energy and convert it into electrical power. The brown-and-yellow insect’s body shell, called an exoskeleton, can harvest solar energy, which is then changed into electrical energy by chemicals in the yellow pigment of hornet’s abdomen. If the processes can be replicated using scientific biomimicry, human beings may be able to build new technology based on understanding the Oriental hornet’s natural abilities to harvest and convert solar energy.

Not only can the Oriental hornet harvest solar energy and convert it to electric power, the insect has a built-in heat pump system that keeps its body cool while it hunts for food in the hot sun.

Quoted in ScienceDaily.com, physicist David Bergman of Tel Aviv University's School of Physics and Astronomy says, “The interesting thing here is that a living biological creature does a thing like that. The hornet may have discovered things we do not yet know." In an effort to explain the biological processes that turn a hornet's abdomen into solar cells, Bergman and his doctoral candidate Marian Plotkin are conducting research that builds upon investigation begun by the late professor Jacob Ishay of the university's Sackler Faculty of Medicine.