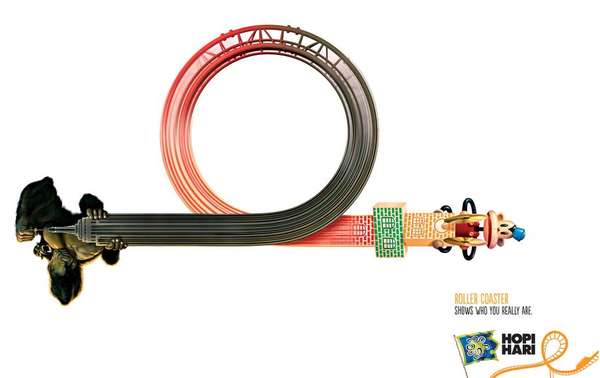 These Hopi Hari Ads Strip the Cockiness Away from Tough Characters

Alexander Lam — July 8, 2013 — Marketing
References: hopihari.br & ibelieveinadv
A series of Hopi Hari ads from the Brazilian theme park promise to reveal who you truly are. The print ads feature a rollercoaster connected to two characters. On one side, there's a tough and macho figure. On the other, the ad has a toned down version of the original character. Accompanying the extremely humorous visuals is the text "Rollercoaster. Shows who you really are."

Conceived, designed and executed by ad agency Y&R Brazil, the ads were created to draw thrill-seekers to Hopi Hari. Each ad issues a challenge to the viewer by claiming the rollercoasters are able to strip away your tough or macho exterior. An illustration of King Kong becomes a toy monkey on the other end of the spectrum, while an army general becomes a toy soldier.
4.1
Score
Popularity
Activity
Freshness