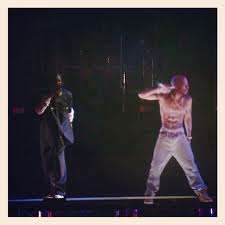 The Tupac Coachella Hologram by AV Concepts is Incredibly Convincing

Courtney Scharf — April 16, 2012 — Pop Culture
References: metallungies & huffingtonpost
Share on Facebook Share on Twitter Share on LinkedIn Share on Pinterest
This Sunday, in an effort put forward by Dr. Dre and Snoop Dogg, festival-goers were graced and amazed by the Tupac Coachella hologram from the deceased rap legend. The set, which included hits like “Hail Mary” and “Gangsta Party,” was made only more mind-blowing when the rapper actually referenced “Coachella” aloud.

AV Concepts is the company responsible for bringing ‘Pac back to life so incredibly convincingly. Musion has done similar work for Mariah Carey. This past Christmas, the UK-based company created an entire concert featuring the female songstress.

Could we be seeing more performances "from the grave" in the near future? It would only seem fair to follow up with a Biggie hologram, would it not? With Whitney, The King of Pop, and a slew of other passed but eternally worshipped entertainers, the potential that this technology holds is remarkable and exciting.
5.3
Score
Popularity
Activity
Freshness
Get Better and Faster