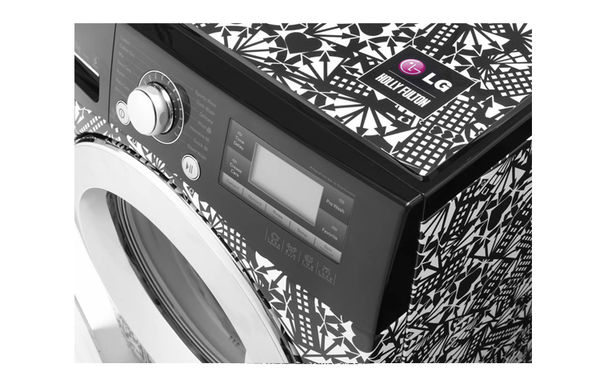 Amelia Roblin — September 26, 2013 — Art & Design
References: lg & apartmenttherapy
Share on Facebook Share on Twitter Share on LinkedIn Share on Pinterest
Once considered members of the white goods family, washing machines and clothes dryers moved into the modern make of stainless steel and brightly colored to contribute to one's interior decor. What you won't have seen before, however, is anything like the Holly Fulton LG washing machine. This appliance is completely covered in a highly patterned graphic that truly dresses it up.

You may recognize the name as belonging to a successful contemporary fashion designer. Indeed, the contraption that's intended to clean garments has become aesthetically influenced by them. The base hue of the Holly Fulton LG washing machine remains black, but geometric and heart-shaped motifs in white have been arranged all over the majority of its visible surfaces. You'll even see a surprising infusion of orange, pink, yellow and green in some of the shapes.
3.2
Score
Popularity
Activity
Freshness
Jeremy Gutsche Keynote Speaker