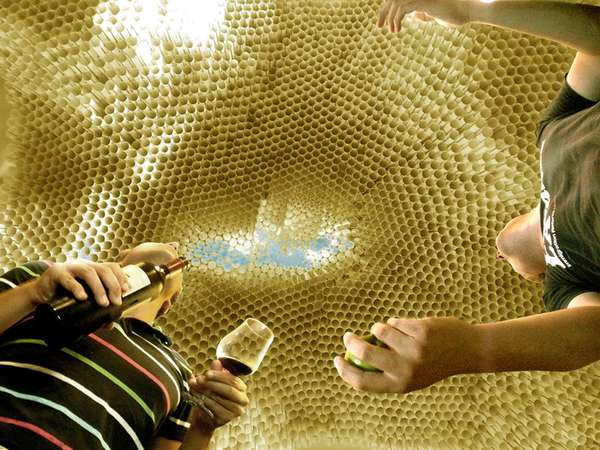 'Hollow' by Visiondivision is a Straw Structure Social Experience

Amelia Roblin — September 6, 2010 — Art & Design
References: thegoldbrain.blogspot & designboom
The 'Sukkah City' competition in New York City called for the design of a modern temporary shelter reminiscent of the traditional sukkahs, and thus was the submission of 'Hollow' by Visiondivision. The Swedish architectural firm was asked, like many others, to construct the hut from branches in a manner other than bundling them.

Built for an annual Jewish harvest festival, this contemporary reinvented sukkah has been installed in Union Square, composed of thousands of hollow reeds of varying lengths, compressed together to form undulating shapes above and spaces below. 'Hollow' by Visiondivision is large enough to accommodate a handful of seated people, establishing a casual social environment in a fast-pace bustling city.

Canine Hobbit Homes
The All Natural DIY Dog House by Fibrillaria Made of Straw, Manure