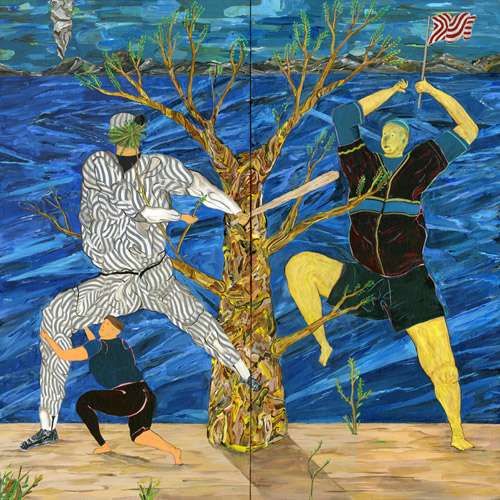 Featuring the work of 31-year-old Japanese-born, Brooklyn-based artist Hiro Kurata, the 'Play the Right Game' exhibit compiles a series of illustrations Kurata created to explore the themes of baseball and the modern heroic figure.

The artwork is jarring and incongruous at first glance. The baseball players are massive, abstract, and engaged in battle. The ballplayers look like monsters and seem to behave like them, too. My favorite image from Hiro Kurata's collection sees a pin-stripe wearing ballplayer about to complete a homerun swing under the chin of a Greek-God looking character. The similarity between athletic heroism (and the way it is celebrated) and the exciting folklore that surrounds Greek mythology seems to be a major part of the reason Kurata chose this for his exhibit. Not only does it force the viewer to think about America's favorite past-time and the way sports is covered, it shows that an abstract and aesthetically pleasing painting can pay tribute to a topic while also critiquing it.

Implications - One of the most effective ways a company can garner immediate consumer attention is by investing in marketing that features strong surrealist elements. By forcing consumers to look closely at the ad to understand the message, the company embeds its logo, image, and the marketing in the subconscious of the consumer.
2.9
Score
Popularity
Activity
Freshness
Jeremy Gutsche Keynote Speaker