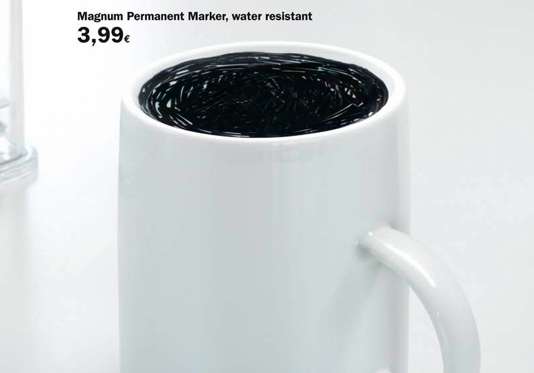 Amelia Roblin — July 3, 2011 — Unique
References: knsk.de & adsoftheworld
Share on Facebook Share on Twitter Share on LinkedIn Share on Pinterest
So long as you're not with a company that pushes productivity, the office is notoriously a place of boredom and procrastination. This Herlitz 'Cheap Fun' campaign recommends a few unconventional ways to use its desk drawer implements as a way to seek amusement amidst the dull conditions of a colorless cubicle.

The KNSK Werbeagentur advertising agency of Hamburg, Germany, has playfully put together a series of three prints that childishly, yet cleverly, exploit the uses of these knickknacks. To trick a colleague into staining his lips and drinking from an empty mug, the inside of a coffee cup has been colored black with a marker. Correction fluid was used to white-out the woman's skirt of the female bathroom symbol, and the mischievous Herlitz 'Cheap Fun' campaign sees a thumb tack placed pin upwards on the "start" button of the photocopier.
5.3
Score
Popularity
Activity
Freshness
Get Trend Hunter Dashboard