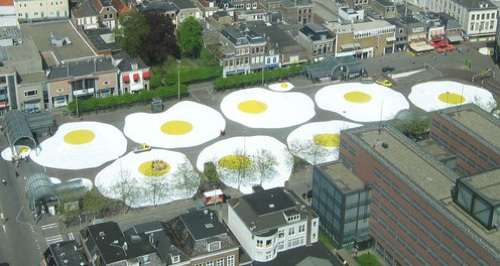 The Art Aggcident will be on display in a giant urban square for the next six months in Leeuwarden, Netherlands. Each 100 foot wide egg includes a painted white base resembling the egg white and a raised, yellow bubble meant to represent the yolk.

Both the Art Eggcident and Urban River previously featured were created by Henk Hofstra, an artist who creates these projects in hopes of them being featured on Google Earth.

Check out this Urban River, followed by another Google Earth designed project based on the "Where's Waldo?" books.