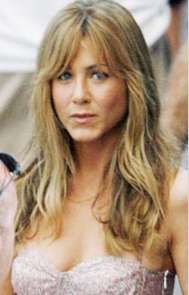 The hairstyle consist of longer bangs that cover the brow and are slightly flare out to either side from the centre. It looks a little messy, but that's the point; that tousled, just-got-out-of-bed look is very sexy. The hair acts almost like a curtain, framing the eyes and even hiding them a little for that added mystery that can be so alluring.

Jennifer Aniston has been seen on the Miami set of her latest film, Marley and Me, sporting the heavy bang, and it looks adorable! Other celebs that have taken their manes through a time warp include Kate Moss, Carmen Electra and Tyra Banks.

Halle Berry shows that parting the heavy bang on the side is another stunning alternative.

Heidi Klum and Kate Hudson tried a heavy bang too, but ditched their parts entirely, blow drying them in a solid chunk for a posher, cleaned up look.