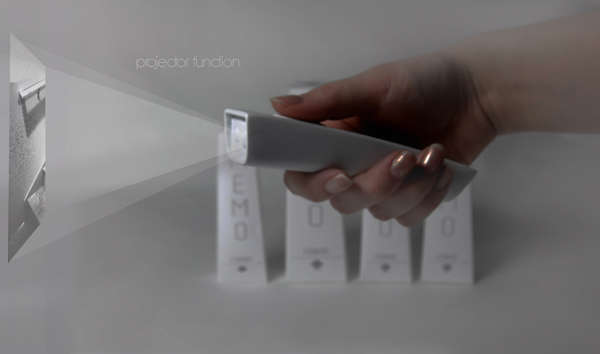 Alexander Lam — June 13, 2013 — Tech
References: behance.net & yankodesign
The Memo by designer Stephanie Liu is an ultra-portable handheld light, projector and camera. Housed in a sleek plastic casing, the device was built to disrupt the way that we see flashlights. With the advent of the smartphone, flashlights have become a much less popular tool. However, the Memo aims to change that by allowing the user to do more than project light. The projector and camera functions let Memo users manipulate and capture light as well.

The concept flashlight’s functions works to complement each other. When illuminating something, tapping a button on the top of the Memo captures the lit up scene. That image can then be easily projected back out for easy and convenient viewing. If you want to transfer that picture elsewhere, a retractable USB port is available on the base of the flashlight.