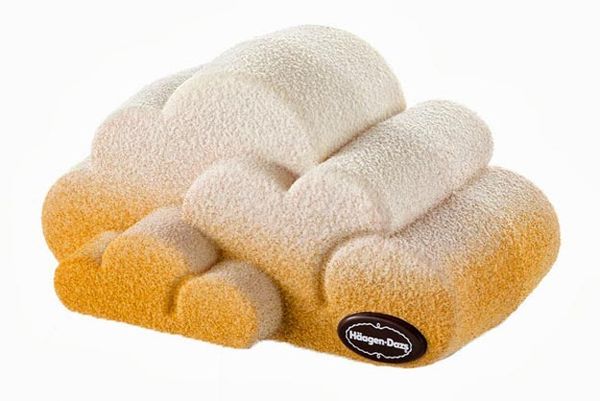 Meghan Young — September 27, 2013 — Lifestyle
References: haagendazs & psfk
The Haagen-Dazs Cloud Desserts will certainly have people on cloud nine. For those who have been waiting for Haagen-Dazs' latest Christmas creation, it has been released way ahead of the happiest of holidays. The decadent delicacy is such a treat that some people might not even want to dig into it. Not only does the luxury ice cream take on the fluffy shape of a cloud, the Haagen-Dazs Cloud Desserts boasts an ombre-dipped appearance that is definitely with the times.

Created in collaboration with Front, an all-woman design trio from Sweden, the Haagen-Dazs Cloud Desserts is available in two colors and flavors: Dawn and Twilight. Dawn is a combination of the Marc de Champagne Truffle flavor with Belgian Chocolate, with swirls of Almond Macaroon biscuit for some extra crunch while Twilight is a mixture of Dulce de Leche and Cookies and Cream.
2.7
Score
Popularity
Activity
Freshness